Learning about architectural history from the ground (foundation) up is the key to understand how different cultures effect each other’s way of life and surroundings.  As the class moves forward into our alternatives section, I am seeing how true my first sentence really is. It is important to have a good foundation before you move forward.

Intellectual foundations are seen as showing what people are doing over time;  how they take and process information previously known and use it accordingly based on, to name a few, their culture and age. Seeing how Egypt effects Greece and how they all effect Rome is something that was very apparent here.  There are a few key terms that show up in all three of these cultures; stacking, hierarchy, organizational, spirituality and story-telling.  Starting from the early settlements, such as  Mesopotamia and the Ohio Valley, stacking of local materials using slaves is seen here to make walls, buildings and burial places.  In Mesopotamia, some of the early cities are found; The Ziggurat of Ur-Nammu is an example.  This building is made out of stone blocks with steps leading up to the top.  Height showing power and closeness to the heavens and materials used representing the physical labor that was needed to built it. Comparing this to the Pyramids of Giza, you will see some similarities.  Both show height and imposing itself onto the landscape, as well as power from the size of the structure.  These structures also tell stories by using hieroglyphics on the exterior.  Since urban planning begins in Egypt (City of Sesotris ii), Axis’ are now established and are even found in modern times.  Vertical axis – using a circle as it’s center, represent the path to the Gods and heavens.  Horizontal axis’ are the pathways for humans to travel.  Taking this forward to Greece, it is easy to see why the center was important in Greek design – they thought that they were the center of the world and Athens became the center of Greece.  Organizational layout becomes clear with the construction of the Acropolis and the way line, form and space is organized within this city.  They have a great command for asymmetrical balance and even portraying some of what we now call the principles of design – repetition, proportion and balance.  Repetition of the columns, proportion of the buildings to each other (also showing hierarchy with size) help move us forward in time to see how these ideas and designs effect Roman culture and design.
The temples in Greece and Egypt are the proto-buildings for Rome – architecture was influenced by many other societies.  Rome was a modern city – a lot like our own civilization and they were concerned with extravagant pleasure.  They introduce some new building types; Baths, Basilica’s, coliseums and markets.  Plumbing was also introduced at this time with the addition of aqueducts.  These buildings helped people congregate (coliseums, baths, markets), celebrate (temples) and meditate (basilica’s).  With these new building types came old construction practices such as stacking, decorative coverings as well as the use of shapes, such as arches.  Arches could be used in markets, where it is laid on the earth’s surface in a semi-circular form giving boundaries, or in Baths which help make the space grander by keeping it more open.  Where the Egyptians and Greeks used hieroglyphics, the Romans used mosaics to tell their story.

I think the best example of architecture that could represent all three of these cultures is the Coliseum in Rome.  The exterior tells a story of what almost appears as the progression of architecture; showing the use of stacking, arches, the different architectural column orders.  On the interior picture, you will see how the space is organized along axial lines and how the floor reminds one of an Egyptian pyramid – is laid out almost like a maze. 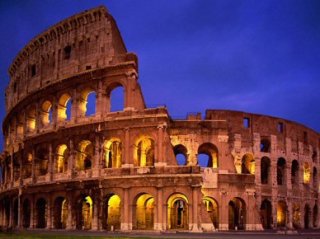