For this Dialog project, we were required to use 12 sticks and 12 planes and find our dialog inspiration and use it to create two spaces with these objects.  We couldn’t fold the planes (4×6 in size) more then once and we needed to keep the length of the sticks uniform.  This project then needed to be placed on a 12×12 base. 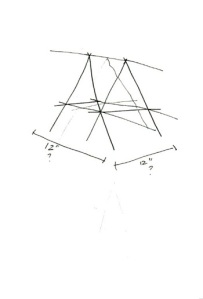 I originally started thinking about the triangular form as specified in my initial drawings shown here.  I wanted to create a space above the horizontal stick and then the second space would be below.  It looked great on paper, but when I actually started to put it together, I was not as crazy about the design as I was on paper.  I was finding it difficult to figure out how to attach the planes without making it look like I just laid them on top of the sticks half hazardly…  I also tried a few different joinery options for the sticks.  I tried string which worked out pretty well but really stood out since I needed to use enough to hold it tightly.  I also tried using Sobo glue, which was not as successful.  it took a long time to dry, and then looked too “crusty”.  I decided to start over and come up with a new design. ..

The sketch above is from my sketchbook while I was eating at an Indian restaurant for lunch and trying to come up with new ideas.  I knew I needed to simplify my idea and thought I would come up with what dialog means to me… as well as what simplicity means.  I then drew what was supposed to be scale figures around some shape ideas I was coming up with.  Some of the ideas were simple and some weren’t.  it’s funny to me now that I look back on this sketch that I drew what was later to become my project.  It took me many sleepless nights and tries to get to my final.  I just seemed to have “designer’s block” and was not coming up with anything worth showing.